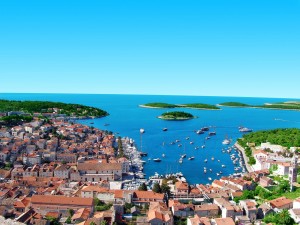 By thinking of Hvar, most people don’t know this Pearl in The Adriatic Sea, ready to be explored for your next events or incentives. Hvar: is a mix of St. Tropez and the inland of Tuscany.

Feel the charm of the Island Hvar just off the coast near Split, see the turquoise costs, the charming little villages influenced by Italy and the southern France. Discover the rustic and charming narrow streets, go to the most beautiful places and different trendy lounge clubs, restaurants or night clubs by speedboats, discover the inland by beatles and have lunch in the olive yards, taste the excellent wines  in the boutique vineyards, enjoy the fragrance  of the lavendel fields in the spring.

Try the local tasty dishes with pure ingredients and fresh fish, and enjoy a good Croatian wine in one of the lively small streets in the city center or in the picturesque harbor. Have a look at the fashionable small boutiques.

Hvar is cosmopolitan,  sophisticated and elegant combined with a rich history and tradition. Celebrities like Tom Cruise, Beyonce and Gwynneth Paltrow and the Royals, Prince Harry and Prinsess Caroline of Monaco are already seen in Hvar.

Hvar has all ingredients for a pure and dynamic incentive or event.

Best period: May, June, September, October.
Temperature:  Mediterranean, which means nice temperature from March until October.
Flights to Split: Croatian Airlines (via Zagreb), Austrian Airlines (via Vienna), Lufthansa (via Frankfurt) Brussels Airlines ( via Zagreb as of September 2015).
Tip: Choose for a transfer from Split to Hvar by speed boats or catamaran!

DMC Intours has local offices in Split, Hvar & Dubrovnik but also in Ljubljana, Bled, Portoroz and Istria.
Would you like more information? Send a mail to info@riamooijaart.com or call Ria.

Argentina, the land of Gauchos!
Scroll to top