I visited Jaisalmer in 1978. A camel cart transferred me to what was then the city’s most luxurious hotel, the Tourist Bungalow, which had four rooms.
Fast forward to 2014, there are more four wheel drives than you would care to count. Occasionally, you might see a camel. The city has spread itself like the tentacles of an octopus in all four directions with the Golden Citadel as its centrepiece, but there is something magical about Jaisalmer – a certain something, a je ne sais quoi about this medieval fortress.

In the words of Sting, “I enter the fort through old doors guarded by tribesmen standing beside camels and move into a dimly lit courtyard where candles flicker in stone niches. A band of musicians strike up a song – of war, women, welcome? Who knows, but it is stirring stuff.” From Roxanne to Rajasthan.

Jaisalmer is unique. Not only is it the oldest, and the most spectacular, fort in Rajasthan – dating from the 12th century – but it is the oldest inhabited citadel in the world. Some 20,000 people today – and it can sometimes seem, an equal number of cows – live within its walls, and the medieval battlements and turrets spread out like an illustration from The Arabian Nights. 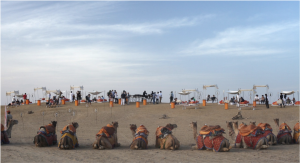 And if Jaisalmer is your destination, then Suryagarh is the hotel where you simply have to stay. The stunning 40- acre property with 72 rooms has been built using architectural cues from old forts and local temples in and around Jaisalmer. Its ramparts, moat, carved pillars and even the latticework are emblematic of the region. 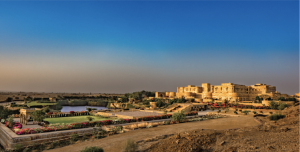 Led by their eclectic General Manager, they’ll pamper you from the moment you step in. Enjoy an evening of song and dance, Jaisalmer kebabs and biryani at the Lake Gardens set to the melodies of Mehboob Khan, a pedigreed desert musician who belongs to a clan of musicians known as the Manganiyars. Watch the Gair dancers “whirling dervishes”perform alongside the Kalbélia’s, women in flowing black skirts who dance and swirl, replicating the movements of a serpent, while men accompany them on the ”khanjari’’ a percussion instrument. 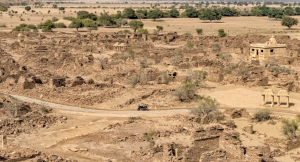 But let us bring back the camel. After all, it’s the ship of the desert. Ride on camels through an abandoned village where the eerie is very present! 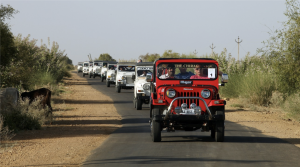 Then set down for sundowners. Drive (or be driven in) a “desi” local 4-wheeler deep into the desert, where myths and legends get a new lease of life, old tales become plausible, cemeteries hold great treasures and temples in the middle of nowhere become landmarks of culture.

And here you can enjoy a sumptuous spread of Indian savouries and sip champagne “a volonté.” Come. Experience the Joy’s of Jaisalmer.

Jaisalmer has two daily direct flights from Delhi and Jaipur at convenient times which allows you to connect the Golden City and the Pink City.

The Land of Land Rovers
Scroll to top